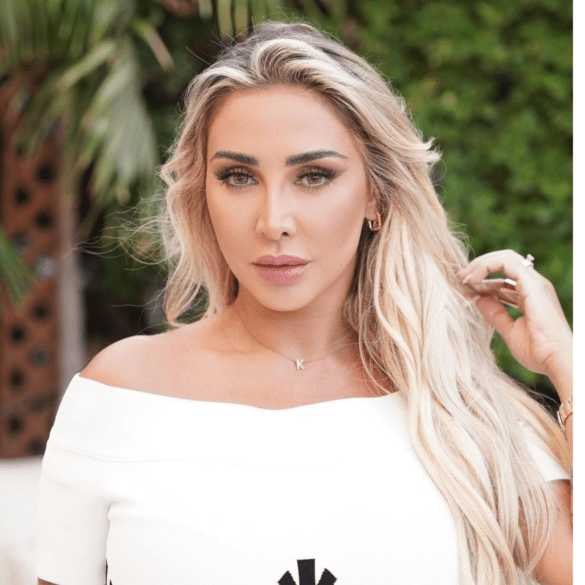 Joelle is a notable Lebanese television host, make-up artist, and businesswoman.  She is the proud CEO and founder of the Joelle Group, a beauty business. The lady takes pride in being the host of the makeover TV program “Joelle,” which has been broadcast on MBC, the top satellite TV channel in the Middle East, which draws over 120 million viewers daily.

Joelle Mardinian was born in Beirut, Lebanon, on November 27, 1977, she holds Lebanese nationality, and her zodiac sign is Sagittarius.  Joelle Mardinian’s early years of her life in Beirut, Lebanon. She loved visiting her grandmother and her cousins while she was in Beirut. Since her mother was a makeup artist, she began experimenting with makeup as a young girl.

She completed her makeup training in the UK before hosting the popular MBC makeover TV show “Joelle Show” on Lebanese television.

Joelle began her career as a freelancer at the age of 18. She gave up on the idea of working for someone else after a certain amount of time because she wanted to spread her entrepreneurial wings.

As a budding entrepreneur, she launched her own business in 2008 and established “Maison de Joelle.” Due to Joelle’s dedication and conviction, her company, which currently operates thirteen salons across Dubai, Abu Dhabi, Al Ain, Qatar, Erbil, Riyadh, Jeddah, Kurdistan, Tunis, and Morocco, has grown successfully.

Joelle decided to set up a new business, a cosmetic clinic, in wellness and beauty after realizing the need of the hour and conducting a market analysis. Joelle was also chosen in 2010 to serve as the Max Factor regional creative director. She has also worked as the brand ambassador for Pantene, Braun, and, most recently, Dyson and Evian.

Mardinian is also the businessman in charge of the Joelle Group, a conglomerate of beauty businesses that includes an upscale salon. She is one of the most well-known Arab TV presenters thanks to her “Joelle Show,” which airs on MBC1 and is the longest-running makeover program in the region. The cosmetic surgery center Clinica Joelle, the skincare line Joelle Paris, and most recently, a line of colored contact lenses called EyeCandy.

Joelle Unfiltered, a new reality TV series that Mardinian recently debuted on Shahid VIP, will provide an accurate look into the lives of the Lebanese makeup artist, her husband, and their three kids. Mardinian calls it the “biggest show of my life” because it’s anticipated to reveal a lot about her and her family that the general public doesn’t know.

How did Joelle Mardinian Become Famous?

Joelle got the recognition after running her own television show. When her show became popular on the channel and even in the country, people started knowing her, and then the lady started her own salon.  Now, she is one of the most well-known Arab TV presenters thanks to her “Joelle Show,” which airs on MBC1 and is the longest-running makeover program in the region.

Joelle is a stunning 46-year-old lady with glowing cheeks and radiant skin. She is 5’6″ and weighs 69 kg. She has a thick, bold, and sizzling physique. Her beautiful brown hair with golden highlights is skillfully cut into long layers.

The lady has attractive and magnificent almond shape dark brown eyes, but the lady also uses green, blue, and grey lenses. However, her bust is 38 inches wide, her waist is 29 inches wide, and her hips are 39 inches wide.

On Instagram posts, Joelle posts her glamorous and attractive photos from photoshoots, television shows, events, lifestyle events, trips, and more. The celebrity shares all details on her IG. She has over 20.5 million followers and 10k plus posts. She puts a lot of details in the stories section, such as trips, outings, profession, family, and more.

The celebrity has been active on Twitter since January 2011. At present, she has gathered over 293.5k followers with 8.3k tweets. Joelle shares her endearing and enticing photographs as well as videos from TV shows and others. In addition, she has also attached her website link over there.

On her self-titled YouTube channel, the lady talks about skincare, hair care, face laser, makeup tutorials, makeup, and much more. Mardinian has over 236K subscribers and 18,975,955 views. On the most popular video on her channel, the celebrity got over 3.1 million views.

Her family, Wikipedia showed that she is the daughter of Sofia Mardinian. And her other family members, such as siblings and father, haven’t news as of now.

Her first marriage was unsuccessful, and the lady separated from her husband several years ago.In 2010, the lady tied her know with Kamal Kaddoura, and he is a businessman from Lebanon. Her children are Bailey, Ella Sofia Kaddoura, and Nathan Mark.

Joelle Mardinian’s estimated net worth is about $60 million.  The notable lady earns money in several ways, such as social media, YouTube, as a host at TV shows, and brand endorsements. She also makes a large portion of her income from her beauty salon and other businesses.

Azza Zarour is a singer, YouTuber, and TV program presenter. She has a solid reputation for being a host on television networks such as MBC 3. She released “Rouh Rouh,” her debut single, on July 23, 2021. On YouTube, Azza’s channel has over 3 million subscribers.

Joelle’s closet or wardrobe is also an exciting thing about her. She chooses to wear a chic top with panty, a bikini, lingerie, a striped top with shorts, a sweatshirt with trousers, a top with matching trousers or dress pants, a bodycon, and a t-shirt with trouser, and a 2-piece formal dress.

Who is Joelle Mardinian?

Joelle Mardinian is a Lebanese entrepreneur, make-up artist, television host social media influencer. She was born on November 27, 1977, in Beirut, Lebanon. Her zodiac sign is Sagittarius. The founder and CEO of the beauty company Joelle. Her own programme, The Joelle Show, was hosted by her. On her @maisondejoelleofficial Instagram page, she frequently shares fashion and beauty-related content.

How is Joelle Mardinian’s husband?

What is the age of Joelle Mardinian?

When does Joelle Mardinian celebrate her birthday?

Her birthday is on November 27.

What is Joelle Mardinian’s height?

Where is Joelle Mardinian from?

She is from the Beirut, Lebanon.

How much is Joelle Mardinian’s net worth?